The popular PBS KIDS® television show, Sid the Science Kid, is coming to the live stage. Sid the Science Kid – LIVE! will be at Comerica Theatre on Saturday, March 1st at 3:30pm. Tickets are on-sale now at Ticketmaster.com or at the box office. For group sales please call 602-379-2888 and press 2.

The star of the show (Sid of course!), is joined by his cohorts May, Gabriela, & Gerald, as they discover the excitement and curiosities of the world. The whole family will be cheering and dancing along, as Sid & friends set off on a day of excitement and adventure, asking curious questions and finding cool answers. Even teacher Susie will be there to keep the music flowing, as the characters interact with the audience, figuring out the world together!

Sid The Science Kid – LIVE! is created for the stage by the imaginative minds of Michael Lewis (veteran Broadway performer and producer of ImaginOcean), John Tartaglia (creator and writer of ImaginOcean and Tony Award-nominated actor), and The Jim Henson Company.

The Sid the Science Kid television series is an educational animated show produced by The Jim Henson Company for PBS KIDS®. It uses comedy and music to promote exploration, discovery and science readiness among preschoolers. This landmark production of 66 half-hour episodes debuted on September 1, 2008, and has since been honored with five EMMY nominations and multiple awards including the most recent CINE Golden Eagle Award. 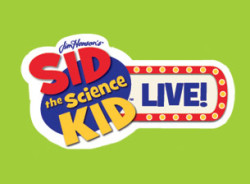 Get your tickets today!

PreviousPrevious post: Why I’m Getting A Divorce in 2014
NextNext post:Every Good Thing

One thought on “SID THE SCIENCE KID – LIVE!”