DISNEY ON ICE SETS THE GOLD STANDARD WITH THE 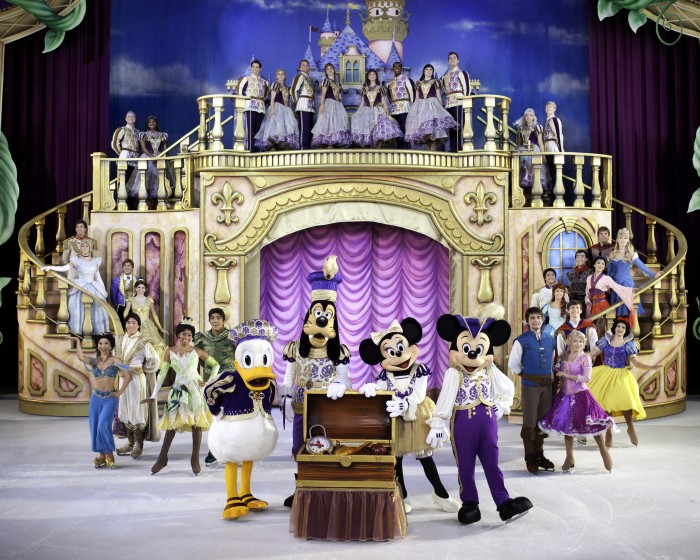 (PHOENIX / January 30, 2016) – Audiences will discover endless riches when an extraordinary lineup of stories from the Disney Vault come to life for the ultimate Disney animation celebration with the delightful production, Disney On Ice presents Treasure Trove – Presented by Stonyfield YoKids Organic Yogurt.  Disney On Ice sets the gold standard with its skating spectacular spanning tales from the first full-length animated film to the 50th Disney film, playing the Talking Stick Resort Arena in Phoenix from April 7th – 10th.

Hit the ice with Mickey Mouse, Minnie Mouse, Donald and Goofy as they embark on a fun-filled treasure hunt for some of the most popular Disney films ever.  Get tangled up in Disney’s 50th animated feature with Rapunzel and Flynn. Enter the worlds of your other favorite Disney Princesses: Ariel, Belle, Cinderella, Jasmine, Aurora, Tiana, Mulan and, of course, the one who started it all, Snow White.  Ahoy, Mateys!  Set sail with Peter Pan, the always sassy Tinker Bell and the cantankerous Captain Hook & his pirate pals! Trek the wilds of Africa with Simba, Nala, Pumbaa and Timon as they discover the true meaning of the ‘Circle of Life.’  Tick-Tock! Tick-Tock! Don’t be late to a very important date with Alice and the Mad Hatter as they march with the Queen of Hearts’ Army of Cards.  Plus set a playdate with Woody and Buzz Lightyear because the toys are back in town!  Highlighting eight Disney movies and more than 50 Disney characters featured, Feld Entertainment’s Disney On Ice presents Treasure Trove – Presented by YoKids will create memories your family will treasure for a lifetime!

Tickets available for purchase online at www.Ticketmaster.com, charge by phone at 800-745-3000 or in-person at the venue Box Office.