Tickets On Sale Next Saturday, June 1st at Ticketmaster.com 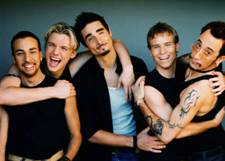 PHOENIX, AZ (May 24, 2013) –  Backstreet Boys announced today that they will release a brand new album and embark on a 24 city North American tour with all five original members – Nick Carter, Howie Dorough, Brian Litrell, AJ McLean and Kevin Richardson.  The In A World Like This album is set for release on July 30th. This is the band’s first tour with all five original members in a decade.

The tour makes a stop at Comerica Theatre on Thursday, September 5th.  Special guest Jesse McCartney and DJ Pauly D will open the 7:30pm show.  Tickets will go on sale next Saturday, June 1st at 10am.  Tickets will be available at Ticketmaster.com, ComericaTheatre.com, Ticketmaster Outlets, the box office or call 602-379-2888 and press 2.  All tickets are subject to applicable service charges and fees.  Dates and times are subject to change without notice.

All five of us are thrilled to be back together and have the opportunity to play for the greatest fans in the world,” said Nick Carter.  Backstreet Boys will be joined by special guests Jesse McCartney and DJ Pauly D.

From the first note to the last, In A World Like This impressively showcases the group’s preeminent pop mastery with a collection of indelible tracks that surely rank among their biggest and best hits.

Fans were treated to a performance of new song “Permanent Stain” today on Good Morning America where the boys announced their new album and world-tour.  To show their appreciation to their fans, Backstreet Boys will be giving away a free download of “Permanent Stain” with the purchase of tickets to their upcoming US tour.

Rolling Stone caught up with the guys about the new album and tour and said:

In A World Like This is an album that sees the guys revisiting the groundbreaking dance-pop sound that first made them international superstars. Songs like the Max Martin penned first single, In A World Like This, are classic BSB, bursting with big hooks, unforgettable melodies, and high-energy rhythms that both highlights the group’s classic sound and vision while also placing it squarely in the here and now.

The first single “In A World Like This” will be available everywhere starting on June 25th.

“We always want to top our previous albums. That’s always our objective,” says Carter. “All five of us were determined to create an album where every song could be a single.”

Backstreet Boys did just that. In A World Like This captures unified voices making the most vital music imaginable, and five talented artists creating influential, unforgettable pop.

“Our goal is always to push ourselves as much as possible,” adds McLean. “We want Backstreet Boys to keep setting the template and raising the bar.”

In A World Like This was recorded in London and Los Angeles with producers / fans Martin Terefe, Max Martin, Morgan Reid & Prophet, Dan Muckula and Justin Trugman.

One of the most successful groups in music history, with countless #1s, record-setting tours, and worldwide sales in excess of 130 million, Backstreet Boys are also among pop’s most influential.