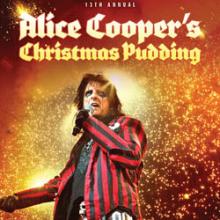 (Phoenix, AZ) – This holiday season shock rocker Alice Cooper will be in good company when he’s joined by many of rock and roll’s biggest stars, including Gene Simmons and Paul Stanley of KISS, Rob Zombie, Vince Neil of Motley Crue, and several more surprise guests soon to be announced. Proceeds from the event directly benefit Alice Cooper’s Solid Rock Teen Center.
Celebrating its 13th season, Alice Cooper’s annual Christmas Pudding brings together some of the finest musicians, dancers, and comedians in today’s entertainment history. Together, they create a magical evening of music, comedy, dance, and a bit of mayhem. This highly anticipated event brings fans from all over the world, year after year.
Former Seinfeld and Family Feud star John O’Hurley will serve as a guest host for the festivities.
Alice Cooper’s 13th Annual Christmas Pudding will also include performances from the winners of this year’s Proof is in the Pudding, Alice’s own version of “American Idol.”

“Although I have played more than 100 shows this year, Pudding is the one I look forward to most,” said Cooper. “We love bringing people together for Christmas, for the sake of music and dance and the mission of Solid Rock.”

Tickets will go on sale this Friday, October 18th at 10 a.m. Tickets range from $38.00 to $253, with all proceeds from the event benefitting Solid Rock, which reaches out to teens through free music, dance, and voice lessons and more.

*Tickets will be available through Ticketmaster, Comerica Theatre box office or by phone at (602) 379-2888. Tickets are subject to applicable services fees.

Solid Rock is a 501 (c)(3) non-profit Arizona corporation founded by long time Arizona residents Alice and Sheryl Cooper. Together, they envisioned an organization solely dedicated to helping at-risk teens. In November of 1995, Solid Rock was founded and the dream became a reality.  Originally, Solid Rock existed to raise money for other organizations and individuals with like-minded missions. However, the dream went well beyond its original fundraising foundation.  Alice, Sheryl and Chuck proposed a teen center that provides an outlet where they can flourish, understand themselves, and learn and equip themselves for the road ahead. Thus, the idea of “The Rock” teen center was born and the primary mission of Solid Rock was realized.

The Rock Teen Center offers teens an outlet for their creativity and gets them off the streets. Located on the southeastern corner of Thunderbird Road and 32nd Street in Phoenix, Arizona, the 23,000-square-foot Rock at 32nd Street, which encompasses the Rock Teen Center, an auditorium, dance studio, and music rooms for guitar, bass and drum lessons, was built in partnership with Genesis Church and Cooper’s Solid Rock nonprofit organization.   Completed in April 2012, the Center is expected to expand to 40,000 square feet with the proposed addition of a gym and indoor skate park.  For more information, visit www.alicecoopersolidrock.com or call 602-522-9200.