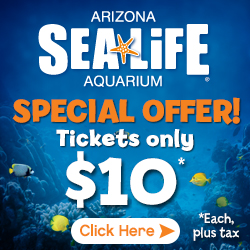 (Tempe, Ariz., Mar. 6, 2015) – Some of the ocean’s brainiest creatures will be invading SEA LIFE Arizona this month! The aquarium’s newest exhibit, Octopus Hideout, will open to the public March 20.

Octopus Hideout features five tanks of cephalopods (meaning “head foot” because their heads are attached to their feet). The Giant Pacific Octopus will reside in one of the largest tanks in the exhibit, but that does not belittle the other fascinating creatures in the exhibit. The Common Cuttlefish and Dwarf Cuttlefish are strangely adorable, with eight arms and two tentacles used for eating. The deep-dwelling Chambered Nautilus looks like something from a sci-fi movie with its 90 tentacles, hard shell and primitive eyes. Last but not least the Peacock Mantis Shrimp rounds out the exhibit. A common predator of cephalopods, the Mantis Shrimp can “punch” its claws fast enough to break glass- don’t worry; this creature will have a tank of her own!

Octopus Hideout opens to the public March 20, 2015. It is a traveling exhibit and will be on display at SEA LIFE Arizona through the rest of 2015.

For more information and updates on the exhibit, please check the website at www.visitsealife.com/Arizona.

Live It Up AZ