Saturday, December 7 at US Airways Center 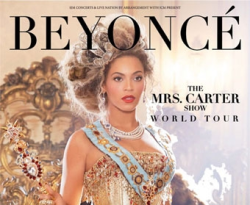 Tickets On Sale Next Monday, July 1 at Ticketmaster.com

‘A masterclass in performance’ ‘Two hours of uplifting escapism’

– Will Hodgkinson, The Times, UK

‘The concert had the air of an ancient goddess worship ceremony.Beyoncé was compelling to watch, and often blistering in her vocal attack.’

PHOENIX, AZ (June 24, 2013) – THE MRS. CARTER SHOW WORLD TOUR starring BEYONCÉ is extending its successful global run with additional dates, just confirmed.  The tour dates will include performances in Mexico, Brazil, Canada, Venezuela, Puerto Rico and over a dozen US cities including a stop in Phoenix at US Airways Center on Saturday, December 7th.   Tickets will go on-sale next Monday, July 1st at 10am at ticketmaster.com, the box office or call 800-745-3000.  The North American tour,  promoted by Live Nation Global Touring and produced by Parkwood Entertainment, kicks off on Friday, June 28 in Los Angeles.

THE MRS. CARTER SHOW WORLD TOUR starring BEYONCÉ, the Biggest Tour of 2013, with its explosive special effects and intricate, strobe-laden light show, is an artistic triumph and the entertainer’s most ambitious undertaking to date.  It is bigger in scope than any of her previous shows, fittingly designed for the vastness of arenas and stadiums.   For an exclusive look at this spectacular live show featuring footage from the European leg in broadcast quality format click here: http://bit.ly/BeyonceTrailer

Sponsored by Pepsi, Coty and MasterCard, tickets for the added North American dates, will be available starting Monday, July 1, 2013 at 10:00AM/EDT at LiveNation.com.  A special pre-sale for registered members of Beyoncé’s BeyHive Blog will begin at 10:00AM/EDT in select markets on Wednesday, June 26.  Fans can go to Beyonce.com to sign up now for the chance to be the first to purchase tickets.  MasterCard pre-sales start Thursday, June 27 at 10:00AM/EDT in select markets. A complete list of tour dates, and on-sale information are provided in the itineraries below.

How Often Do You Go To Concerts?